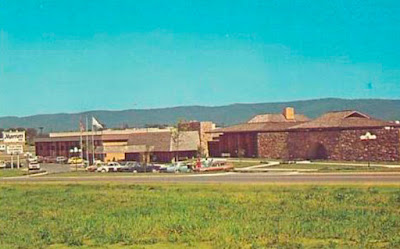 When I first set foot in Blacksburg in 1970 this hotel sat out on Prices Fork Lane mostly by itself.  The road was just a regular old 2 lane road and there was no other commercialism (that I recall) in the immediate vicinity.  The hotel was across from the Tech golf course.

The Marriott got to be a hangout for many of us, especially when we were of legal drinking age.  Their lounge was called Jacob's Lantern and their famous house drink was the Jumpin' Jack Flash.  The cocktail menu suggested you book a room if you had more than 3 ..... can't remember the different liquors that went into that concoction!

At some point in time I remember going to the seafood buffet they had every week, but mostly we went there to get hammered on something other than beer.
Posted by Dennis 10 comments: 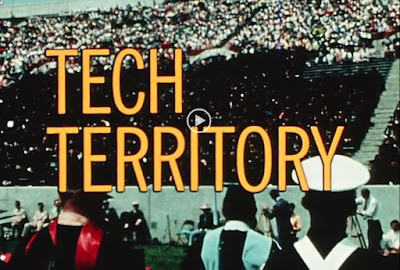 Here's a cheesy little film made on campus around 1970.  If you're old enough to remember waiting in lines at the War Memorial Gym to register for classes, then you might even recognize a friend or two in this film.

Seems odd that the beginning and ending credits didn't include a date, but the cars, haircuts, and clothing styles seem about right for 1970.  At one point in the film some students are dancing to the Rolling Stones "Jumpin Jack Flash" which was released in 1969.

If you figure out a way to better pinpoint the date of this flick, please let me know!

Here's the link:   https://digitalsc.lib.vt.edu/VPIFilmVault/E%20190
Posted by Dennis No comments:

A million thanks to Gary Adkins for sending these photos.  You could tell that Gary was already a professional grade photographer by the quality of these pictures.

This is the band Poco in concert at Cassell Coliseum in 1971.  My roommate had turned me on to these guys only months before they came to play at Virginia Tech.


It was such a great show, the crowd was pumped and rowdy.  At one point the "authorities" stopped the music, turned on the overhead lights, and told the crowd to get off the basketball floor or the show would not go on.  When we returned to our seats the show commenced.  What a great night.

A nice picture here of the old Gables Shopping center in the 1970's..  It's hard to make out in this photo but I think at the far left end was Mick-or-Mack and then the Sears catalogue store (with some merchandise in the store).  Leggett was the center anchor store and near the far right (not in the photo) was High's Ice Cream .... went there a lot in the summertime.
Posted by Dennis 13 comments: 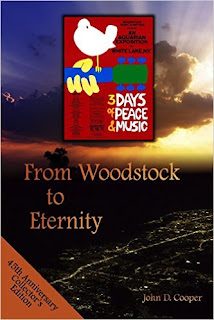 Just got an email from John D. Cooper who was a singer with the popular band Andromeda.   John has written a book entitled "From Woodstock To Eternity" and it is for sale through Amazon.

If you want to wait to get an autographed copy, John will be doing a book signing at Gillies during this year's Steppin' Out festival on August 5 and 6.

I have not read this book but it seems to have very good reviews. 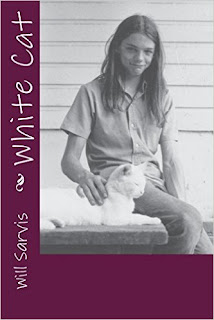 Also, an old acquaintance of mine wrote a fantastic book about his life (somewhat fictionalized as he changed the names of people and places) in Blacksburg and beyond.  The old-timers around town might have known this author as Tom Thumb, but his real name is Will Sarvis.  The book is "White Cat" and is also available on Amazon.  A big part of the enjoyment (for me) was figuring out what individuals he was talking about.  A very gut-wrenching part of the book dealt with the tragic loss of a friend who was run down and killed while riding his motorcycle.  All-in-all it is extremely well written and I enjoyed it so much I was sorry when the book ended .... I wanted more!

Posted by Dennis No comments:

I kept hoping to find a good street scene photo of this place but never could.  The Water Closet came along sometime in the mid-70s and was located to the right of Little Doc's on College Avenue.  It was a pretty cool store that sold water beds (all the rage back then .... and yes, I had one). 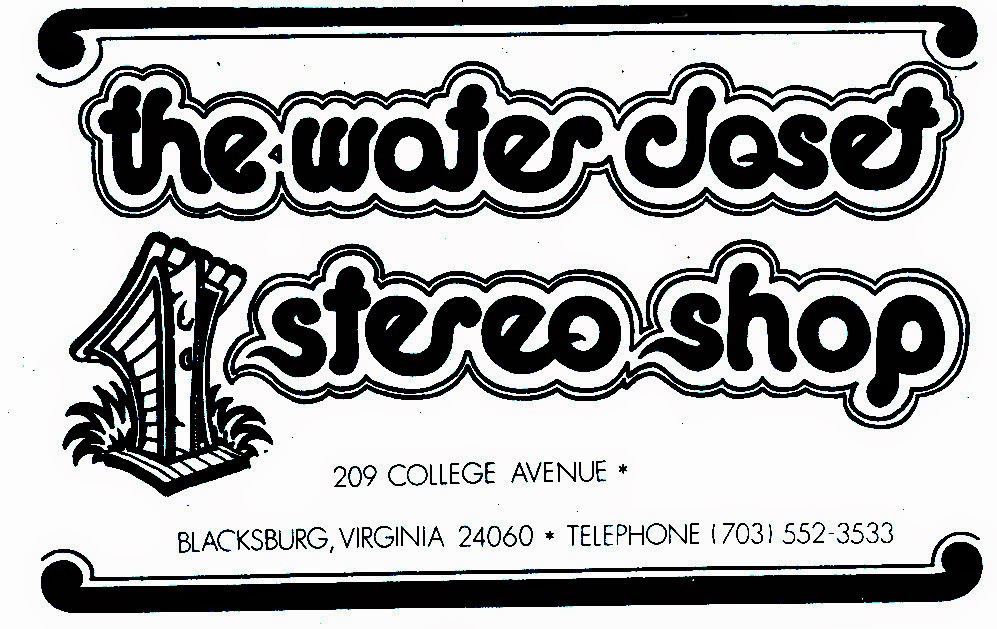 They also sold beanbag chairs, "head" gear, and black lights.  There was an upstairs and a downstairs section and carried some stereo equipment as well. 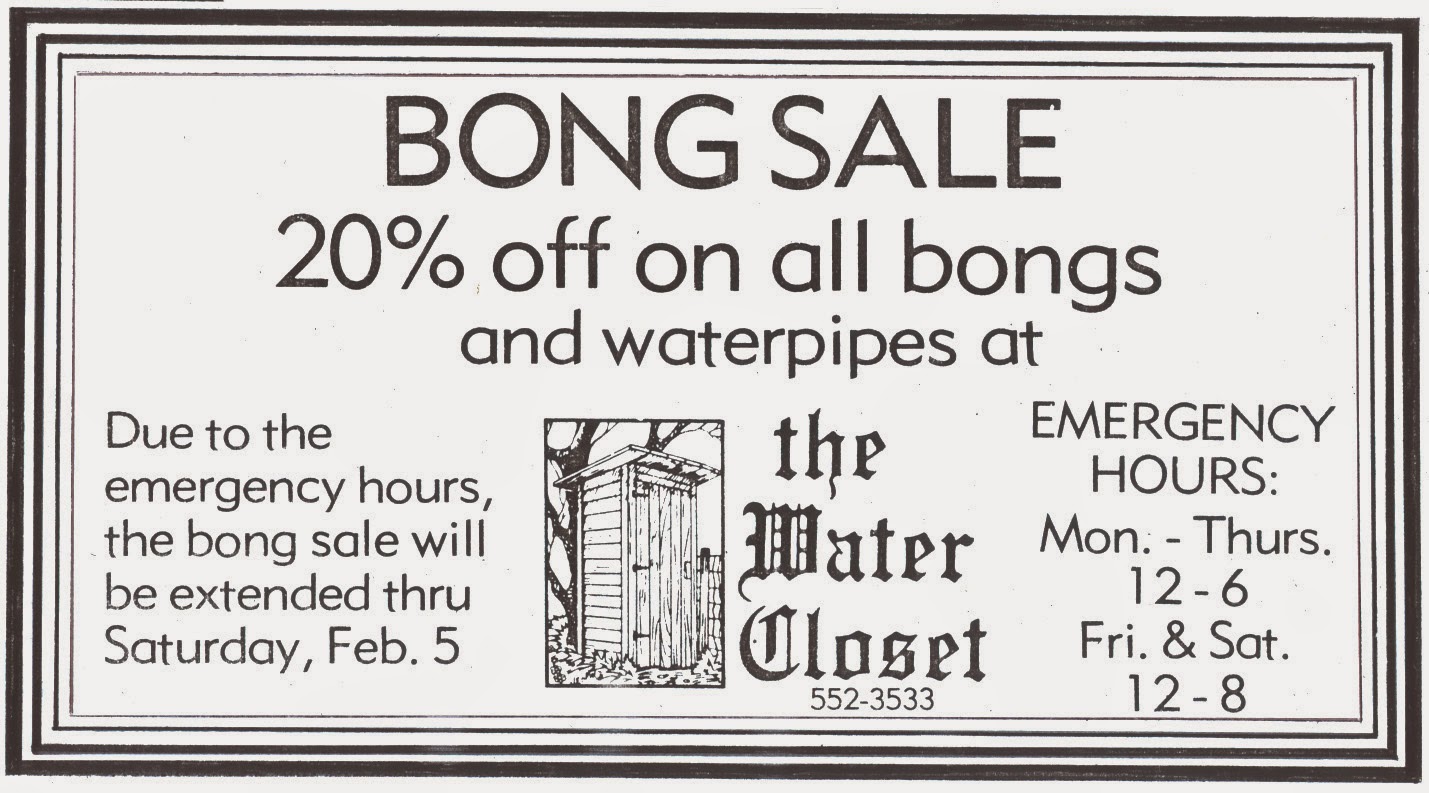 Looking at this ad I wondered what constituted a true Bong emergency, but I don't doubt that it might have happened from time to time.  I assume the Collegiate Times wouldn't be able to post an ad like this today! 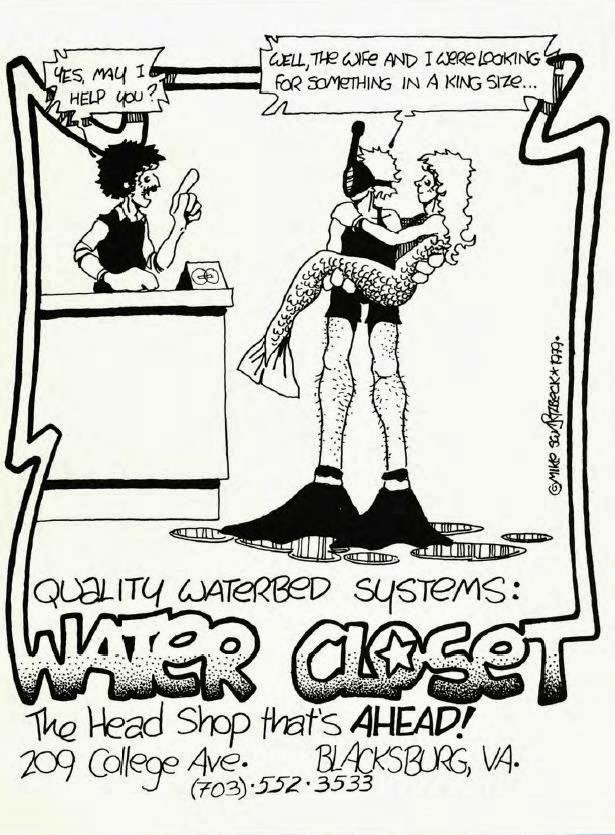 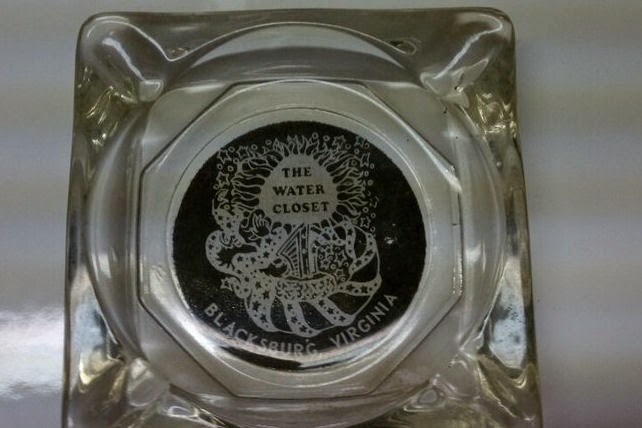 A blog reader sent me this photo of his ash tray some time ago.  At least someone still has a souvenir of the joint.  Anyone else have a memory of The Water Closet?

Not long after this former church building housed the New River Trading Company, it transformed into what many people consider to be the best bar and music venue Blacksburg ever had.

If I have the story right, three business fellows (Bob "Bullwinkle" Summerell, Al Freeman, and Fred Blake) shifted from Levi's to Budweisers around 1973, and over the next couple of years the partnerships changed to include Steve McBroom and most importantly Mike Schwab.

By 1975 or 76, Mike Schwab became the sole owner of the establishment which eventually included wife Linda Ruth.  They enjoyed a 20-year run, and the number of little known and well known musical acts that graced the stage is countless.  In the latter years (1984 to 1995) the joint was known as South Main Cafe, but everyone I knew just called it "117".

If you're too young to remember this place, that's a shame because it was definitely the primary gathering place for cowboys, hippies, and everything in between.  I remember the long neck Buds, pinball machines, pool tables, and a balcony above.  It was rustic, but that's the way we liked it.  Today it is home to Cabo Fish Taco.

I know this post is going to fill up with comments.  Looking forward to the reader's own memories of drunkenness, debauchery, and ass-kicking music.
Posted by Dennis 64 comments: